How Needles are Made 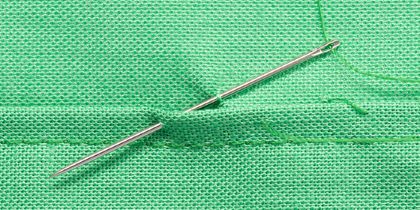 Is it too late to say Happy New Year??  I have to confess that I got a bit sidetracked over the Christmas period.  I did run away with my family for a couple of weeks in January, which was lovely, and I’ve just had Mum (Annette) and Dad visiting for a few days which was great, as due to covid restrictions we hadn’t seen them for just over a year.

Anyway, I’m back on deck again properly now and thought we’d start with an interesting archived article from the late Penny Halgren, that we published a few years ago.  I certainly didn’t know this about needles, and I think it’s always interesting to take a step back sometimes and think about where some of the things we take for granted actually come from.

How Needles are Made

“Was the invention of the wheel really what changed the future of mankind?

Consider this. The man who invented the wheel was wearing animal skins that had been sewn together with a needle.

Being able to sew skins together to craft clothing for warmth and protection enabled Stone Age men to remain in northern areas of the globe, thus breaking away from their nomadic existence.

The needle has always been a simple tool. Whether it is made of bone or metal, the concept remains the same – a pointed instrument that pulls a thread through some type of material.

The key elements being a sharp enough point to poke through the material (be it fabric, leather or something else) and a hole or hook to carry the thread. 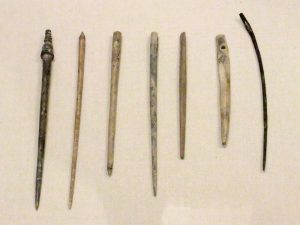 During the Bronze Age, needles were developed that were made from metal instead of the primitive bone or horn. Access to early metal needles was limited by cost, since only gold and bronze were used to manufacture them.

Records indicate that the Spanish became proficient at making excellent sewing needles, and guarded their secrets well, slowing down the spread of manufacturing to other parts of the world. Eventually, though, the English developed a process that continues to be the high bar for modern needles.

The process and the number of steps required to make a needle – even today – is amazing.

Beginning with a coil of wire, the first step was to cut the wire into 3 inch lengths and then straighten the curve. This seems like it would be simple, yet it required that the wire be heated, pressed and then cooled. 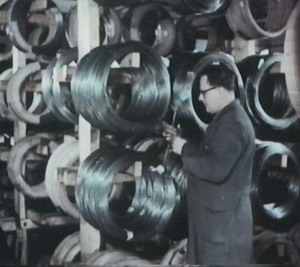 Once cooled, the wire was turned over to a grinder who made points at both ends of the wire. Because this step required a water wheel, early needle makers lived in villages near streams or rivers where they could harness the water for energy to run their water wheels.

As you can imagine, the work of a needle grinder was fairly deadly. Standing over a grindstone breathing particles of jagged steel from the needle and stone dust, these men refused to take any safety precautions since they believed it limited the number of newcomers to the trade. That it did, but it also limited their life expectancy.

Once the points were ground on the ends of the wire, it was taken to the stamping shop where two eyes and two gutters were stamped in the middle, and the eye was punched out.

Using fine wires between the new eyes of the needles, they were separated, the burrs were ground off the ends, and the needles were ready for tempering and finishing.

Tempering was done by heating the needles on trays, then dunking them in oil, making them brittle. The metal is heated and turned by hand with hatchet-like tools, causing it to turn colors from pale red to blue and then to a straw color.

When the tempering was right, the heat was removed and the needles were ready for more finishing.

Needles were felt (yes, by hand) to find small warps. If there were any, the needle was tapped with a small hammer on a tiny anvil to straighten it out. Every day for eight hours a day for 8 days, the needles were rolled in a heavy canvas with oil, soap and emery which made them smooth and shiny.

Then they were dumped into a copper pan filled with soapsuds to be cleaned. The needles were then rinsed and dried in a bin of sawdust.

The challenge at that point was to remove the needles from the sawdust, line them up so they were even and then clump them together so they could be sized. After the needles were sorted into various sizes, they were weighed and put into equal-sized bundles, called a “company.” 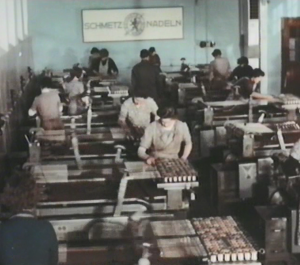 But the process was still not yet complete!

In the final steps, the heads were heated to give them a blue tint and to soften them in order to countersink the eyes. Countersinking was to ensure smoothness so the needle would not shred the thread.

Once the countersinking was complete, skilled grinders once again polished the heads and points of the needles until the desired quality was achieved. Finally, the needles were packaged and sold.

Although completely automated, modern needles are still made from coiled wire, the pieces cut into the length of two needles, and points are ground on both ends of the piece.

Two eye shapes are then stamped in the center of the piece, the holes are punched out and the needles are separated.

Modern needles are tempered and frequently electroplated with nickel. Often the eye portion is gilded, creating a kind of gold look.

There are actually about 70 processes that wire goes through to transform it into a needle!

It’s amazing what it takes to create a short, straight, pointy thing with a hole in one end.” 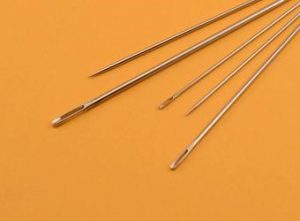 Enjoy your week, and you’ll be looking at your needles with new eyes!

8 responses to “How Needles are Made”

Read through to discover hints and tips, articles from magazine contributors, sneak peeks and more!

Please enter your email address in the box below to receive notification of
new posts by email. 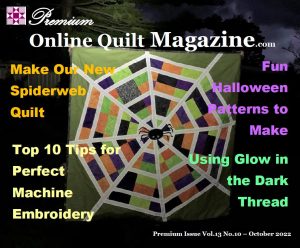